I have previously cited noted psychologist Roy Baumeister for his work demonstrating that sex is a female resource. Now a new study of his published this summer has been doing the rounds. It has been portrayed as proving that gender equality leads to more sex. If true, this would pretty much overturn the standard MRA narrative regarding how feminism correlates with the availability of sex. Sex is still very much seen as a female resource, but the new evidence would appear to indicate that feminism actually leads to women putting out more freely. That would be ironic because we tend to think of feminism as a sexual trade union designed to maximize the value of female assets, driving up the cost of sex.


ABSTRACT
Sexual economics theory assumes that heterosexual communities can be analyzed as marketplaces in which men offer women resources such as love, respect, money, and commitment in exchange for sex. In response to economic, political, and other disadvantages, women collectively restrict their sexuality to maintain a low supply relative to male demand, thereby ensuring a high price. Hence, we tested the hypothesis that sexual norms and practices would be more restrictive in countries marked by gender inequality than in countries where the genders were more equal. An international online sex survey (N>317,000) yielded four measures of sexual activity, and 37 nations' means on all four measures were correlated with independent (World Economic Forum) ratings of gender equality. Consistent with predictions, relatively high gender equality was associated with more casual sex, more sex partners per capita, younger ages for first sex, and greater tolerance/approval of premarital sex.

I always keep an open mind and am able to admit I have been wrong when I encounter new evidence invalidating my previous views. However, having read this article, I don't think the data prove that gender equality leads to more sex for men. Let's look at the actual figures. The numbers in the below table form the entire basis of Baumeister's conclusion. He didn't bother to conduct any surveys himself. Instead he relied on an online sex survey done by condom manufacturer Durex in 2005, from which it was not possible to obtain separate data for males and females, or even gays and straights. Numbers from this database were then combined with an index of gender equality for each country obtained from the Global Gender Gap Report 2006. 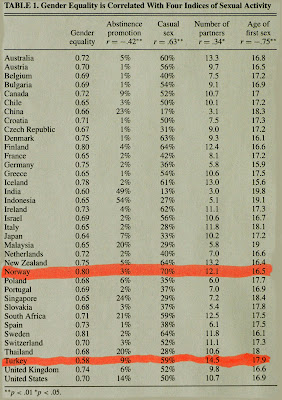 For one thing, the least gender-equal country in the data set (Turkey) is also the one with the highest number of partners, and they are also not terribly far behind on casual sex. How do they do this? But let's say Turkey is some kind of aberration and these correlations are generally accurate. Even so, it's easy to understand that they don't necessarily warrant the conclusion that women dispense sex more liberally when they get more gender equality. If you for example have a bunch of people trading monogamy for casual sex once a year, you get fabulous scores on these "indices of sexual activity," yet there is less sex going on, to say nothing of happiness or quality of life. Clearly these indices can be misleading. And even if there is more casual sex going on in gender-egalitarian societies, and women are willing to be more promiscuous, we have reason to believe a great deal of this extra sex befalls alpha males. The number of partners in the table is just an average, which says nothing about the distribution of these partners. It may not be so egalitarian after all. More likely, something like a Pareto distribution is in effect. It would be consistent with this study as well as every observation and everything I know that 20% of men get 80% of the casual sex. In Norway a full 30% of the population hasn't had a single one-night stand, either. So what if there is less casual sex in non-feminist countries, and you have to wait a couple more years to lose your virginity? As long as you are pretty much assured a wife, this is a better proposition for beta and omega men who rarely if ever would get laid in a feminist society. We already knew alphas have a good time under feminism (at least until they get hit by a rape accusation), so there is really nothing new under the sun in this study.
Posted by Eivind Berge at 1:46 PM 20 comments: Links to this post