Support the Men's Movement by heating your room

I am not exactly used to getting donations. In fact, I have only received one donation so far in ten years of blogging, in the amount of 0.05 bitcoin. That was a great donation, but because much of my paid work has dried up I now feel the need to ask for more. If you support the real Men's Rights Movement and have some cryptocurrency wealth to spare, why not send some of it my way on any of my favorite blockchains so that I can devote myself more to blogging and less to trying to find bullshit work?

If you want to donate in a more anonymous manner, contact me for another address, or even a Zcash z-address if you want all the secrecy cryptocurrency can offer. Come to think of it, there is no reason not to share my z-address right away:

I have never used a z-address before, but if I did, no one (except the sender) would know about it because these addresses have an invisible balance, unlike the very public Bitcoin blockchain. This is beyond what you would think possible if you are unfamiliar with zero-knowledge proofs, but it really works. It works because your Zcash client attempts to decrypt every secret transaction with all your keys to see if they might be yours, and because we trust the Zcash setup Ceremony (if you do).

But I don't really expect direct donations. I have something far easier in mind. Let's make this fun, and try some mining! The barrier to doing this is super low because you don't need to own any currency. You can donate right now by mining for me with hardware you already own, GPUs as well as CPUs. Contrary to what you may have been told, profitability for GPU mining is now very good, with under a year to ROI, and high-end CPUs are also worth mining with if you already have them. A typical graphics card will mine between 1-4 US dollars worth of bitcoin per day (not directly, of course, but via altcoins), and a good CPU will do about 30-60 cents, so it doesn't take many miners to make a substantial contribution to my frugal lifestyle.

This is how I suggest you mine if you are running Windows (if you need Linux advice, just ask in the comments). Download the Legacy Miner from Nicehash. Unzip and install it, let it download the rest of the files it needs, and it will look something like this:

[Update: Nicehash has been hacked and is currently not providing service, so this does not work at the moment. I probably won't be mining with Nicehash anymore even if they come back, unless they also refund the one week of mining income that got stolen from me.] 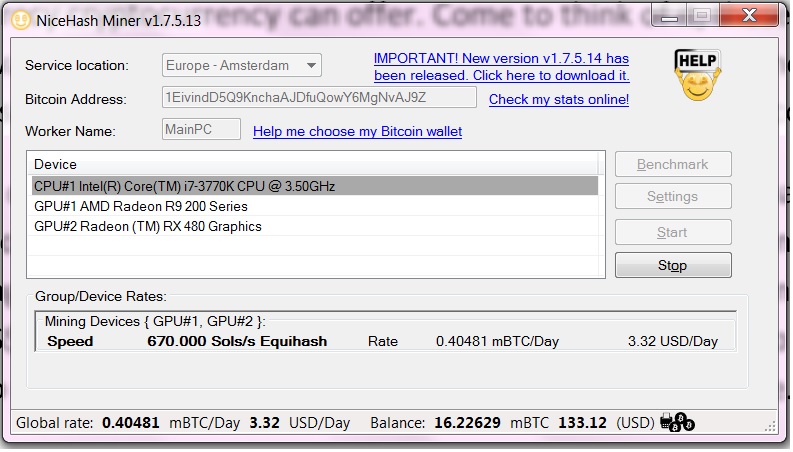 You may need to add an exception for your antivirus software, but I assure you that this program is safe. To mine for me, enter this bitcoin address: 1EivindD5Q9KnchaAJDfuQowY6MgNvAJ9Z. The worker name can be anything you want. With Nicehash operating on the pay-per-share system, every little bit helps when you mine to my address, even if you only mine for a few seconds. Every satoshi counts and is much appreciated! So if you are new to mining, this is a good way to start playing around with it. This method is completely anonymous without any need for registration. If you feel like mining for yourself instead of me, you can switch my bitcoin address for one of your own at any time, but then you have to keep mining until you earn 0.01 bitcoin in order to get a payout. And with winter coming up you probably need some heat anyway, so you aren't necessarily consuming more electricity than usual. Turn down other heaters instead. I guarantee you that once you start heating your house with mining, you never want to go back to paying for heat rather than getting paid for it, or donating as the case may be. Before you know it, you will be building miners to put in every room like I have done.

For example, this is the one in my bedroom. My cat loves mining too because it emits so much heat. 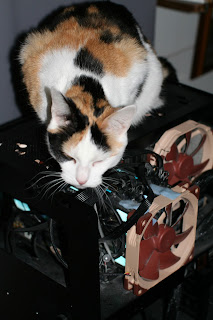 The reason why have trouble supporting myself fully on mining is because I don't have enough money to invest in GPUs. After rent and food, any donations will be invested in more GPUs, which means they will help generate income for several years to come. I am also constrained by the amount of electricity I can dissipate through my apartment, but I haven't reached that limit yet. And when I do reach that limit, I would like to expand into a separate mining facility if possible, but I don't think I strictly need to in order to make a living.

In a future post, I plan to explore the thermodynamic implications of cryptocurrency mining more philosophically, but for now I just need to pay my bills. One way to look at is to regard Bitcoin as a manifestation of the Second Law. As if guided by the universe itself, Bitcoin came into being in the service of entropy, and we are its willing slaves feeding it all the energy we can get our hands on, hastening the degradation of our environment. But such is life. We flourish by consuming, and bitcoin is the most powerful modern expression of this principle. So useless and so useful at the same time. Like spending energy mining and refining gold and then putting it back in a vault underground, we now have an excellent incentive to perform the equivalent intrinsically useless digital work. But it beats bullshit work, because at least it is not about wasting your own time. You will be amazed at how little maintenance a miner needs, and if you run into any difficulties, just ask.
Posted by Eivind Berge at 8:42 PM 162 comments: