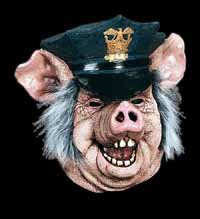 The police force in Norway and other Occidental countries is basically a special interest group for the feminists. They enforce the feminist definition of rape, age of consent and all the other misandrist feminist laws that make my blood boil with hatred. Now Norwegian cops are even empowered by the feminists to arrest me for being a john (while the whores of course are innocent) and this applies anywhere in the world. For this reason, I viscerally despise cops and wish them the worst. Whenever the pigs try to interrogate you, keep this in mind:


Abstract:
The police routinely rely on deception when questioning criminal suspects. Because the United States Supreme Court has placed so few limits on the use of deception, the variety of deceptive techniques is limited chiefly by the ingenuity of the interrogator. Interrogators still rely on the classic "Mutt and Jeff," or "good cop, bad cop" routine. They tell suspects that non-existent eyewitnesses have identified them, or that still at-large accomplices have given statements against them. Occasionally, an interrogator will create a fake lab report purporting to link the suspect to forensic evidence. Most often, interrogators lie to create rapport with a suspect. Thus, an officer with feelings of revulsion toward a suspect accused of a horrible crime may speak in a kindly, solicitous voice and profess to feel compassion for the suspect. The officer may suggest that the victim, even if a child, should share the blame for the crime. In the end, virtually all interrogations involve some deception. At the very least, the successful interrogator deceives the suspect by allowing him to believe that, somehow, it will be in his best interest to undertake the usually self-defeating course of making an uncounseled confession.

Because most deception is employed only after the suspect executes a valid waiver of Miranda rights, Miranda imposes few limits on the use of deceptive interrogation techniques. Thus, commentators have increasingly looked to the voluntariness requirement of the Due Process Clause as a basis for urging drastic limitation on these techniques. Commentators who focused on due process rationales such as equality, trust, morality, and dignity have not been able to mount persuasive arguments for limitation. Reliability, however, as the chief rationale for the voluntariness requirement, is an appropriate concern in setting limits on deceptive interrogation techniques. Deception should not be permitted when it creates an unreasonable risk that an innocent person would falsely confess.

Some commentators have asserted that there is a significant problem with false confessions. In fact, the evidence of false confessions, both in the academic literature and in the popular press, is entirely anecdotal. Statistically sound research on a random sample of confession cases should be conducted. At this point, however, drastic limits on the use of deceptive interrogation techniques are not justified. Such limits would impose substantial costs on society in terms of lost confessions from guilty persons. When guilty persons do not confess, additional resources must be expended to obtain convictions, some guilty persons are able to plead to lesser charges, and some guilty persons simply go free and have the opportunity to commit new crimes.

Although the wrongful conviction of any innocent person is a terrible failing of the criminal justice system, it does matter whether such occurrences constitute rare tragedies or an epidemic.

Laurie Magid is on the feminist side, but thanks for telling it as it is.

Abstract:
This article focuses on the interrogatory stage of police investigation, considering (1) how and why the rather muddled legal theory authorizing deceptive interrogation developed; (2) what deceptive interrogation practices police, in fact, engage in; and -- a far more difficult question -- (3) whether police should ever employ trickery and deception during interrogation in a democratic society valuing fairness in its judicial process.

"Lies And Coercion: Why Psychiatrists Should Not Participate in Police and Intelligence Interrogations"
Jeffrey S. Janofsky, MD
J Am Acad Psychiatry Law 34:4:472-478 (2006)

Abstract:
Police interrogators routinely use deceptive techniques to obtain confessions from criminal suspects. The United States Executive Branch has attempted to justify coercive interrogation techniques in which physical or mental pain and suffering may be used during intelligence interrogations of persons labeled unlawful combatants. It may be appropriate for law enforcement, military, or intelligence personnel who are not physicians to use such techniques. However, forensic psychiatry ethical practice requires honesty, striving for objectivity, and respect for persons. Deceptive and coercive interrogation techniques violate these moral values. When a psychiatrist directly uses, works with others who use, or trains others to use deceptive or coercive techniques to obtain information in police, military, or intelligence interrogations, the psychiatrist breaches basic principles of ethics.

In 1936 in Brown v. Mississippi, a confession was found admissible in state court, even after presentation of undisputed evidence that the defendants were "made to strip," and "were laid over chairs and had their backs cut to pieces with leather strap and buckles... ." They were told by deputies that the whippings would be continued unless and until they confessed. The United States Supreme Court voided the convictions under the due process clause of the Fourteenth Amendment and explicitly outlawed confessions extracted when the police use "violence and brutality."

Since then, however, appellate court decisions have repeatedly found that it is acceptable for police to use artifice, deception, trickery, or fraud during the course of an interrogation. These are all, of course, euphemisms for lying. The Miranda decision limits police deception when police explain Miranda rights to subjects and attempt to obtain a waiver. However, once the police obtain a valid waiver, and absent any expressed invocation of the right to silence or to counsel, the requirements of Miranda do not prevent the police from using almost any deceptive tactic....

I have never trusted the police here in the U.S. In Nashville Tennessee the police pick and choose who they serve and protect. Here they do everything/anything to protect women while they express a huge hard on for arresting men. They are unaffectionately known as " the blue maifa". They control crime and vice. Also, as a result of their whining and bitching, all laws against entrapment have been repealed.

They are an everpresent enemy to all men.

You wish to murder a person? Just... you wish to kill someone? That's what you want to do before you die? Well let me just say, I hope you never get the chance to hurt anyone.