The ugly truth about female sexuality

Commenters on my blog often claim I can't have as much sex as I want because there is simply something wrong with me, and if I only held politically correct feminist views like most people in Norway, I would have no problems. This anonymous comment left last night is typical:

Just because women don't want to have sex with YOU (which I'm willing to bet is because of your digusting view towards them) doesn't mean that they don't want to have sex with men. You are turning your personal issues into a dangerous weapon that will serve no purpose other than to drag down humanity as a whole. That's right, we're in this together men and women both with equal responsibility.

If my views were really the problem, then other men in Norway, being the well-trained feminists that they are, would have as much sex as they want. But they don't. We are certainly not in this together with equal responsibility, because women call all the shots and have all the power. Sexuality belongs entirely to women, and men are far from satisfied with what women decide to give us. A recent study by Leif Edward Ottesen Kennair et al. gives the lie to the myth that all is idyllic in this feminist utopia:

Once again it is demonstrated that sex is a female resource. Norway is extremely egalitarian and feminist -- according to the article "typically the highest rated nation in terms of gender empowerment as indexed by the United Nations" -- yet women desire as few partners and little sex after as much courtship as ever. The only thing changed as a result of all this feminist "empowerment" is that women now tell the truth about actual partners rather than underestimating as they have done on past surveys. Remarkably, for the first time women and men report the same number of partners in the last year on average, which mathematically must be the same in the same population. This shows women are honest, so we have every reason to believe they are also telling the truth about wanting sex less than men and with far fewer partners. Even with the extreme scores (all male, of course) omitted, which means the difference is probably actually larger, sexual attitudes are so profoundly different: 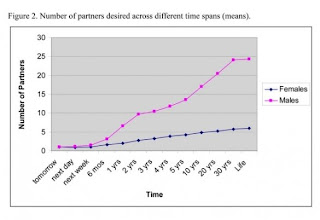 It is by now abundantly clear that this is immutable human nature. Norwegian women believe they can do everything men can and they don’t even face significant shaming for being sluts, yet they simply don’t want sex as much as men, even on anonymous surveys. This is the ugly truth about female sexuality, well explained by the difference in minimum parental investment required of the sexes. There is nothing morally wrong with women for pursuing this limited sexual strategy, of course, any more than there is anything wrong with men for wanting to sleep with as many women as possible. Each sex is simply acting optimally according to the mandates of evolution. But it does mean that sexual equality is not achievable. And it means that when women coerce equality in other areas, making male sexuality even more worthless, then the appropriate response from men is to coerce sexual equality to recover what we have lost by women's unprecedented economic freedom to express their feral, extremely picky sexuality.

The authors warn against the dangers of denying sex differences:

Importantly, one should seriously consider the effects of continuing to make claims that are not reasonable based on the extant empirical evidence. Continuing to claim that there are no significant, predictable sex differences in sexual desire, fantasy, or attitude does a disservice to the truth, and will only generate attitudes of distrust and violation from those who in time come to learn the actual evidence. According to this study and the overwhelming weight of the evidence, it is clear: there are sex differences. In everyday life, people continue to be exposed to these differences and only an honest approach to the expression of sex differences will allow us to fully understand them.

From a clinical perspective, it is worrisome to consider the effects of claims that there are no differences, when indeed there are, have on the emotional climate of couples experiencing differences. In such cases, experts claiming that there are no differences will be inducing guilt and shame in females, and doubt and worry in males, and increase the number of couples experiencing differences in sexual desire that believe there is something wrong in their relationship. Thereby ideological claims of similarity aimed at not suppressing female sexuality, might be causing females to feel pressure into having sex they do not desire.

All of this is true, but it is also dangerous to tell the truth about sexuality in an equalist society, because equality applied to sex is not going to be pleasant for women. So perhaps the social constructionist feminists are not really the clowns they appear to be. All the hate my blog has elicited indicates that deep down feminists know true equality would also entail sexual coercion, because women's advantage as sex objects is so great that it surpasses any historical male privilege, and when all this supposed male privilege is abolished, we are left with sexual oppression of men. They can't really argue against this rationally, so they resort to denying sex differences instead and try to have me censored or worse.

well, as you know, i've been repeatedly banned and censored on twitter. but i've also been banned dozens of times from websites/forums.
of course, you are 100% correct.women won't admit it, but they are in full control of sex. THEY decide how much, little, or none us men get.
unless, of COURSE youre rich and/or famous celebrity( tiger woods, etc etc)
here's the bottom line: the truth is simply NOT welcome.
one woman came on my blog to deny it's a matriarchy here in the u.s!
but,this comes from a nation of brainwashed idiots who believe EVERYTHING they hear or see on tv, including iraqi wmds, iranian nukes
' if we dont fight them over there we'll have to fight them here'
and on and on with the nonsense.
the u.s is indeed a matriarchy, and an imperialist nation.
and it's only going to get worse.

American discussion forum where I was pegged as a misogynist

- to me, most of these people come across as brainwashed:

Check out this little story:
http://dotconnectoruk.blogspot.com/2010/06/nicolas-sarkozy-bans-tall-workers-from.html

And then the first comment - from a woman, perhaps in the UK, one "Noor al Haqiqa":

I always told my girls, if given the choice fall in love with a tall man because a little man was usually like a chihuahua. Yip yip nip snarl because of lack of stature in both height and ... er... uhm.. you know.. down THERE.

Whereas a taller guy just went "gruff" when necessary, fully confident in his stature and size to not need to resort to such pettiness.

Too funny for words if only it were not so pathetically influentially true."

Now, that's female sensitivity for you, once again. And yet, many of these creatures (females) try to peddle the notion that they are somehow more sensitive than men, and they are better at valuing personality, humour and such. They also like to believe that they master the art of speaking about emotions, putting words on them, than men do.

Don't ever listen to that crap.

Thankfully, women are mostly in so little control of their own thought processes and hormonal influences etc, that they constantly make gaffes like the woman here did, and reveal their true nature.

It hardly seems right to bring more representatives of this gender into boardrooms and such, by way of affirmative action. Women are also known to be worse leaders than men, and there is more conflict under female leaders. No wonder, since they can't think logically or rationally, and can't act consistently.