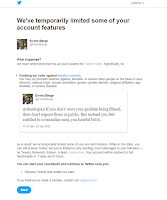 The day they start censoring ideology, we are in real trouble. But that is not happening yet from my point of view. Feminist ideology is winning, but we can still express dissent as long as we go about it in a rhetorically cool-headed manner. Which is the best rhetorical strategy anyhow. Remember, my most impactful tweet was just a lexicographical suggestion, and it pissed more feminists off than saying "bitch" or any other officially bad word ever can.
Posted by Eivind Berge at 3:29 PM