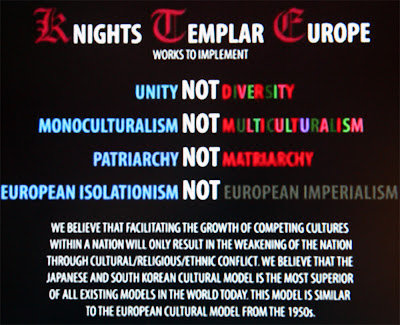 At the time I wrote my last blog post, I believed I would probably become Norway's first modern violent activist in peacetime. Celibacy enforced by a feminist regime had driven me to the point where I saw no other option. I would target the pigs who enforce feminist law, knowing I could realistically at least kill one of them before I would be captured or killed myself. Thus revenge would be assured and if I lived, my reputation as a violent criminal would make me attractive to some women. But then in the nick of time this blog attracted a lovely girl commenting as "Emma." It turns out her real name is Nataliya and she is now my girlfriend. No actual violence was necessary, and it looked like Norway would be a peaceful place for now. I knew things are seriously amiss around here and that neither feminism nor multiculturalism is sustainable in the long run, but I had no idea a formidable activist named Anders Behring Breivik was already years into meticulously planning an attack that would show the entire world what Vikings are made of.

On July 22, 2011 the social democratic regime in Oslo was struck by violence so spectacular it took us all by surprise. The ruling class of a country has never, as far as I know, been so systematically and viciously assaulted by a single individual. The bombing of government offices was impressive enough, but the shooting spree which followed was mind-bogglingly effective, literally decimating the crème de la crème of aspiring young politicians for the ruling Labor Party. The ethics of shooting defenseless teenagers at summer camp can be questioned, to say the least, but it sure was a brilliant way to strike at the core of the Norwegian political elite. These are the next generation of political leaders, and what better way to terrorize the parents – the current top holders of political office – than going after their kids? As Glenn Beck has observed, the AUF youth at Utøya are reminiscent of Hitler-Jugend. Utøya is where leftist kids come to be indoctrinated every summer, steeping themselves in liberal propaganda and listening to inspirational speeches by current and former social democratic leaders such as Gro Harlem Brundtland. In retrospect, it was extremely thoughtless by the ruling class not to post a single armed guard at this event. Politics is serious business after all, and such a hotbed of recruitment concentrated on an island with no easy escape is an obvious target for political enemies, if you think about it. I guess they were still under the illusion that Norway is an idyllic place which somehow does not foster violent malcontents no matter how downtrodden we get.

Indeed, the perpetrators of the evils against men I've chronicled on my blog are the direct maleficiaries of Breivik's aggression. While I am as prone to feeling sympathy for innocent-looking kids as the next guy, and I too feel this atrocity was a bit excessive, then the ugly face of the scumbag Knut Storberget keeps appearing in the news to remind me that this was not an attack against the innocent. Storberget is the main poster boy for feminist corruption of justice, and there is no fucking way his presence can evoke anything but hatred. The corrupt nature of the Norwegian justice system hits home also when, as Breivik appeared at the hearing Monday, the court closed its doors and conducted its business in complete secrecy, admitting neither the public nor the press. They shamelessly did this by request of the cops in order to prevent Breivik from addressing the public. And Storberget is already starting to exploit the situation by agitating for a stronger police state.

Fortunately, Breivik was able to release a manifesto which is now so widely disseminated that they have no hope of censoring it. It could be better, marred by plagiarism as well as lack of proofreading (for obvious reasons, this could not be outsourced), but overall, 2083 – A European Declaration of Independence is fairly decent and contains much truth. While I cannot get behind Breivik’s entire program (for one thing, as a libertarian, I strongly support freedom of religion, though I acknowledge the problems associated with Islam gaining influence in Europe), he does, at least, understand sexual politics:


Females have a significantly higher proportion of erotic capital than males due to biological differences (men have significantly more prevalent sexual urges than females and are thus easily manipulated). The female manipulation of males has been institutionalised during the last decades and is a partial cause of the feminisation of men in Europe. This highly underestimated factor has contributed to the creation and rise of the matriarchal systems which are now dominating Western European countries. European women, in light of the feminist revolution, are now considerably more influential than men due to the sum of all forms of capital. (p. 1180)

From this follows also the fact that rape is equality, as I have pointed out, though it is unclear if Breivik has yet to grasp this point. He seems lamentably politically correct in some ways and at times spouts feminist drivel of the worst kind, such as, “Ethical dilemmas which involve sex can often appear in situations where there is a significant power difference or where there is a pre-existing professional relationship between the participants, or where consent is partial or uncertain” (p. 1173). This is the kind of feminist tripe used to legitimize the worst sex laws against men, and sadly he appears to have internalized it.

Nonetheless, Breivik was sufficiently angered by the Norwegian feminist/Marxist regime to attack it with the utmost vengeance. As was I before I got a girlfriend; the difference being my relative lack of conscientiousness and restraint in expressing my views. As a very public MRA already on the radar for intending violence, there would be no way I could purchase the ingredients to make a bomb without arousing suspicion; and even if I could, I would be unlikely to have the patience and diligence to complete a clandestine project on such a scale. But I would still be able to make a bloody nuisance of myself.

Breivik is being called insane right now for fancying himself at war with the establishment, and apparently regarding some newly founded incarnation of the Knights Templar as the legitimate authority in Europe. While that does seem a bit grandiose and perhaps fictitious, we must not forget that his perspective spans more than 60 years. By 2083, it is entirely possible, I think, that we may go through a civil war in Europe, the outcome of which is uncertain. I will not be surprised if Breivik turns out to be a greater hero in the long run to more people than the Marxist “traitors” he executed. Now he will surely gain a bevy of female admirers, as well.

Being born just one year apart, we grew up under similar circumstances. Norway today is a society sick to the core. It is a place which breeds monsters out of the betas and omegas in a sexual market increasingly skewed against males. I am not sure Breivik is properly considered just another beta going on a rampage out of sexual frustration (Breivik seems to me so idealistic his actions transcend sexuality, but then again it is usually a mistake to think men do anything at all for any reason other than to get laid), as fellow Roissysphere blogger Whiskey contends, but I know how close I was to such a rampage myself, and undoubtedly we will see increasing violence if feminist sexual politics is allowed to continue. I don’t particularly have a dog in the Christian vs. Islam fight (maybe this shows bad character, but I would not be averse to convert to Islam if that was the way to get laid), and now that I have a girlfriend I am not out in the front lines attacking feminists, either, but I remain politically aware, and recent events have been a step in the right direction insofar as they demonstrate a willingness among conservative men to revolt against the heretofore completely dominant left.
Posted by Eivind Berge at 12:34 AM 96 comments: