A serious talk about consent

Let's leave the nonsense about brain development and other red herrings to the normies and have a serious chat about consent. And let's do so from a male perspective rather than an imitated feminist perspective like fake MRAs do. You see, there are some things where consent really matters and is impossible. They are not what the feminists claim, and feminist reasons applied to boys are also gibberish. The real things males can't properly consent to are evolutionary traps.

Within behavioral and ecological sciences, evolutionary traps occur when rapid environmental change triggers organisms to make maladaptive behavioral decisions. While these traps may take place within any type of behavioral context (e.g. mate selection, navigation, nest-site selection), the most empirically and theoretically well-understood type of evolutionary trap is the ecological trap which represents maladaptive habitat selection behavior.
Witherington demonstrates an interesting case of a "navigational trap". Over evolutionary time, hatchling sea turtles have evolved the tendency to migrate toward the light of the moon upon emerging from their sand nests. However, in the modern world, this has resulted in them tending to orient towards bright beach-front lighting, which is a more intense light source than the moon. As a result, the hatchlings migrate up the beach and away from the ocean where they exhaust themselves, desiccate and die either as a result of exhaustion, dehydration or predation.

Sea turtles can consent to the light of the moon, but not the lights of modern human civilization. In order for sea turtles to be able to consent to city lights, they would have to keep evolving for however long it takes to be cognizant of the true fitness values involved. Similarly, human males cannot consent to digital pornography, which are another kind of modern lights leading individuals systematically astray to desiccate and die childless, even suffer predation along the way from the feminist police state.

This is a true meaning of consent, unlike the mumbo-jumbo promoted by our gynocentric culture. We also arguably can't consent to gambling and hard addictive drugs for similar reasons. We can debate whether we still want to permit some of these things (and certainly prohibition can easily do more harm than good, as we have seen with the war on drugs), but the case against them can't be dismissed so easily, which can be summed up as an inability to consent.
So please, let's quit obsessing over fake cases of invalid consent like those mocked in this excellent meme and pay attention to what matters. 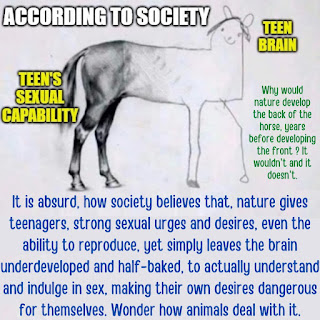