So I was on a podcast last night and an audience member made a false accusation to the police live because they didn't like my opinion that the age of consent needs to be lowered to 13: 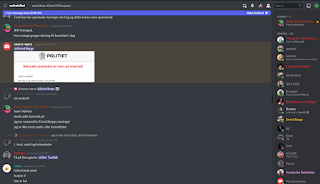 I don't know what this bigot wrote in their police tip, whether they simply referenced the YouTube video or made up some lies. Most likely the police will recognize it as bullshit, but I am documenting the origin of this accusation here just in case, so if they act on it it will be clear to all what is going on.
I had another false accusation recently (case dropped already) that was more elaborate including role-playing as me on Skype to another vigilante and producing screenshots of it that they submitted to the police along with a deranged story (more on that in a future blog post). You get used to it as an activist on this subject. Vigilante trolls will constantly try to cancel you or frame you or whatever. However, the more they cry wolf, the more ineffectual their accusations become. So by all means, go ahead and spam the police with false accusations about me if that's what you're into.
Posted by Eivind Berge at 1:56 AM 82 comments: