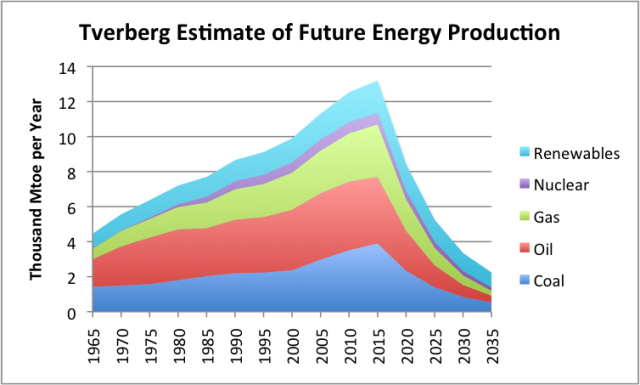 This is Gail Tverberg's estimate of future energy production. For reasons best explained by Gail herself on her blog, I believe this graph represents the most accurate prediction of our future. Now imagine what it will be like. Imagine the human suffering embedded in this graph! All the debt defaults, bankruptcies, unemployment and poverty. Broken supply lines and entropic decay to our infrastructure which will never be repaired. Famines, pestilence and violence. Fascism, failed states, and bloody insurrections. Imagine billions starving to death or otherwise meeting their premature demise. This is the Four Horsemen of the Apocalypse represented as an energy graph, and it is our near future. In 2035, the energy production available to humanity will likely be down to 25% of what it is today. If you thought peak oil meant maybe you would be driving an electric car in 2035, think again, because that kind of green delusional future would require more energy consumption rather than less. And we will get less. A LOT less. The 7000 jobs lost in the Norwegian oil industry thus far is only the beginning, as even the mainstream media is catching on to now.
Posted by Eivind Berge at 12:53 PM

I cannot understand why our governments waste their time on such nonsense as your case with this scenario ahead of us. Or maybe they believe in the Singularity?

Anyway, is it ok if I reprint this text with an reference to your blog?

I am also amazed at the trivialities our authorities focus their efforts on. They seem to think business as usual is a permanent condition that nothing can threaten, and it will be really interesting to see how long they can cling to this belief.

The irony is that US has been driving down the price of oil in order to weaken Russia and Iran. The short sightedness of US and EU politicians will seem very silly in a few years and the EU sanctions on Russia especially. There is also no doubt that feminism contributed very greatly to this madness. Putin is the bane of Western feminists and manginas. He is seen as an unreconstructed man and therefore dangerous. He is routinely referred to as a "thug" in the British media, not because his government is qualitatively more thuggish than the Orwellian UK government but because the thuggery was directed against people such as Pussy Riot.

Note though that the peak energy production in the graphic lies suspiciously at year 2015 (and downhill all the way from there).

That means we will find out pretty soon if she is right. I think there is a good chance 2015 really will be the year of the peak.